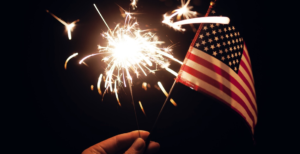 A couple years back I was having a conversation with a family member about how triggering fireworks can be this time of year for people suffering from PTSD. He stated that, while sympathetic, he didn’t understand how someone could be startled or scared by the loud, sometimes shrill, sound of fireworks exploding if they logically knew where the sound was coming from. He said that he grew up near Chicago in the 1960’s at the time of the race riots, and would hear the sounds of gunfire every night. “I’m not trying to dismiss anyone’s experience,” he said. “But I know the difference between the sound of shots being fired and a car backfiring.” Many veterans and those suffering from the effects of complex trauma may have experienced such reactions from otherwise caring and compassionate family and friends. They just don’t understand, and it may be hard to put it into words in a way that would help them understand.

First of all, our response to trauma has nothing to do with our intellect, or our capacity for making sense of the world around us. Years ago, there was a shooting at a place where I worked. There was chaos, confusion, and protocol was not followed, thus putting many more people at risk. I worked nights, and most of the building was empty by the time I left at the end of my shift. A SWAT team and local police had been on site earlier, but there was a misunderstanding that the building was empty, and so they left at 5 pm. I walked out to my car alone, to a large, dark, mostly empty parking lot. I was a few feet away from my car when a car in the distance backfired. I found myself lying flat on the concrete before I even knew what I was doing. Intellectually, I knew that it was just a car. But nonetheless, there I was, moments later dusting off the gravel from my hands as I shakily got up off the ground.

Why does this happen?

(Reference: psychotherapy.net)
The parts of the brain that process trauma all function differently, and the location that processes speech “goes blank.”
We literally don’t have words when trauma is activated, as that location in our brain has temporarily put the “CLOSED” sign up.
What is instead activated in our brain is the area that processes emotion (our limbic system) and the part that alerts us to danger (the amygdala), as well as the visual center of the brain. The sound of a car backfiring caused those areas of my brain to light up (“Yes! We’re OPEN!”), sending out a signal to my body that I am in danger.

The visual part of my brain does the best it can with the information it now has to work with: my brain “sees” what it associates with loud, frightening noise (the situation where the shooting took place) and sends out a signal to the rest of my body that I am not safe. Now all loud, unexpected noises send me into a panic.
My husband accidentally pops the bubble wrap in a package he has received, and I spend the next twenty minutes trembling and out of breath, trying to talk myself through it. I try to find the words to express to him why this was so upsetting, but fail, and only become more distressed. I’m not stupid, I know what bubble wrap is, and that death by bubble wrap is highly unlikely, but my body doesn’t get the message. Only time and quiet make the “fight or flight” feeling go away.

Sometimes explaining our experience and response to trauma to others is simply outside their scope of understanding. That piece of the puzzle is this: even in similar, sometimes shared situations, each individuals experience is different. A soldier goes into an area where war is being waged knowing that their life, and the lives of those around them, is at risk at any given moment. When danger becomes real, the visual and emotional parts of the brain become loaded to capacity. Sights, smells, sounds, and even tactile (touch) related to the trauma are now imprinted in the corresponding parts of the brain, and are now synonymous with danger. My family member may have been hearing shots ring out in the night as many times as a soldier in war does during their tour of duty. But my family member also probably had protective factors in place, such as a caring family that made him feel sheltered and safe. He never had to experience the fear of directly having his life threatened, or watching his loved ones become fatally injured.

If you suffer from PTSD, it is not your fault.

EMDR can help desensitize and reprocess (the D and R in EMDR) these feelings and sensations that defy explanation in mere words. Emotional and mental healing can begin as these memories and experiences become less distressing over time.

For those suffering from PTSD